First, the line of the first wave is drawn, its height will be considered as a unit interval later on. The end of the second wave serves as a reference point for building an invisible vertical line. The corresponding lines are drawn from the reference point on the interval equal to 61.8, 100%, and 161.8 per cent of the unit interval. The third wave is considered to finish near these levels. 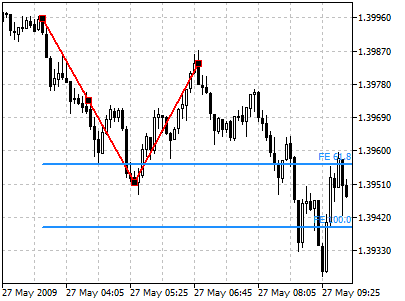 On the first wave there are three points that can be moved by a mouse. Using the first point and the last point (which is the first point of the second wave) length and slope are defined. The last point of the second wave is used for changing its length and slope. The central point (moving point) is used for moving the whole object without changing its size and shape. 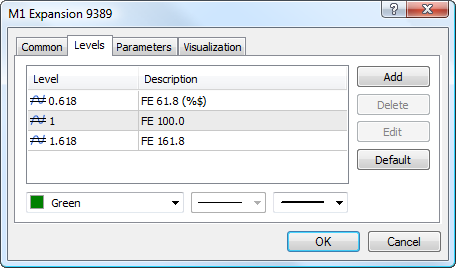 This tab is intended for managing levels of the tool. The Fibonacci Expansion has additional feature of displaying price value of each level. To do it, specify the (%$) symbols in the "Description" field.

There are the following parameters of the object: