Fibonacci Fan as a line instrument is built as follows: a trendline — for example from a trough to the opposing peak is drawn between two extreme points. Then, an "invisible" vertical line is automatically drawn through the second extreme point. After that, three trend lines intersecting this invisible vertical line at Fibonacci levels of 38.2, 50, and 61.8 percent are drawn from the first extreme point.

These lines are considered to represent support and resistance levels. For getting a more precise forecast, it is recommended to use other Fibonacci tools along with the Fan. 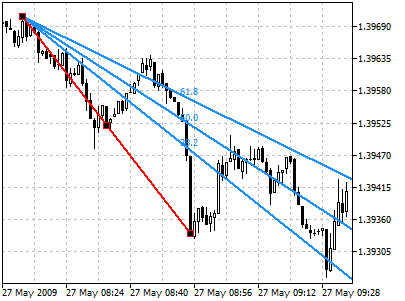 On the main trendline there are three points that can be moved by a mouse. The first and the last points are used for changing the length and direction of lines. The central point (moving point) is used for moving Fibonacci Fan without changing its dimensions and direction.

For Fibonacci Fan trendline construction settings can be changed. Besides, there are the following parameters for this object: 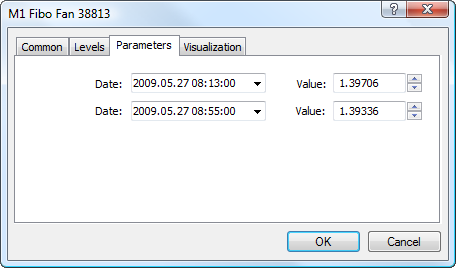