Fibonacci Channels are built using several parallel trendlines. To build this instrument, the channel having the width taken as a unit measure is used. Then, parallel lines are drawn at the values equal to the Fibonacci Numbers, beginning with 0.618-fold size of the channel, then 1.000-fold, 1.618-fold, 2.618-fold, 4.236-fold, etc. As soon as the fifth wave finishes, correction in the direction opposite to the trend can be expected.

It is necessary to remember for a correct Fibonacci Channel building: base line limits the upper part of the channel when trend is ascending, and the lower part of it when trend is descending.

To draw Fibonacci Channel, one should select this object and indicate an initial point of the main trendline in the chart. After that holding the mouse button one should draw a trendline in the necessary direction. Additional parameters will be shown near the end point of the trendline: distance from the initial point along the time axis and distance from the initial point along the price axis. Other lines will be automatically drawn parallel to the main one. 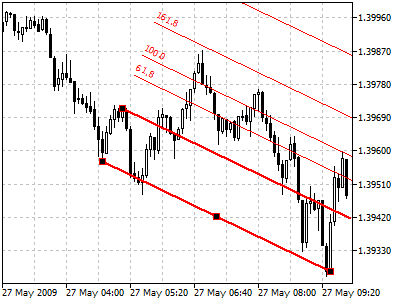 For Fibonacci Channel trendline construction settings can be changed. Besides, there are the following parameters for this object: 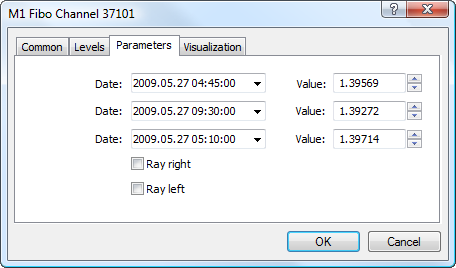