A system of automatic updates is built into the platform. It provides timely updates to new versions. This system can not be deactivated.

Upon connecting to a trade server, the system checks for the platform updates. If a new version of any of the platform components is found, it is automatically downloaded in the background mode.

After the update is downloaded, the following dialog appears prompting you to update the platform:

If the UAC (User Account Control) system is enabled on the computer or the user does not have sufficient rights in the OS, a dialog requesting to confirm/increase the user's permissions appears at the attempt to update. 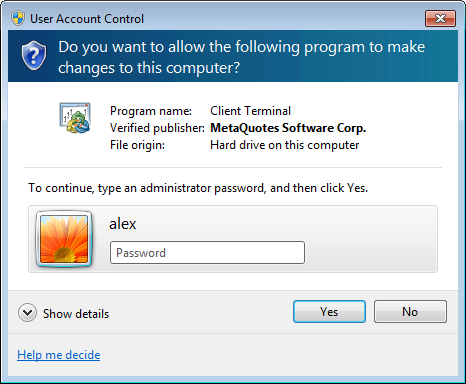 Depending on the user's permissions in MS Windows, it is necessary either to allow the operation (if a user is an administrator) or specify administrator account details.

All user manuals (this User Guide, MetaEditor and MQL5 references) are updated separately. No more than once every two weeks, when a manual is opened, the system checks for its new version. If one is found, the following dialog appears, prompting to download it: