Bill Williams's Awesome Oscillator Technical Indicator (AO) is a 34-period simple moving average, plotted through the middle points of the bars (H+L)/2, which is subtracted from the 5-period simple moving average, built across the central points of the bars (H+L)/2. It shows us quite clearly whats happening to the market driving force at the present moment.

"Saucer" is the only signal to buy that comes when the histogram is above the zero line. It is necessary to remember the following:

Keep in mind, that all Awesome Oscillator bars should be above the zero line for the saucer signal to be used.

"Zero Line Cross" is a Buy signal formed when the histogram moves from negative to positive values. Wherein:

"Twin peaks" – is the only Buy signal that can be generated when the histogram values appear below zero. It is necessary to remember the following:

Awesome Oscillator sell signals are identical to buy. The Saucer signal is reversed as is below zero. Zero Line Cross is on the decrease – the first bar of it is above zero, the second one is below it. The Twin Peaks is above the zero line and is reversed too. 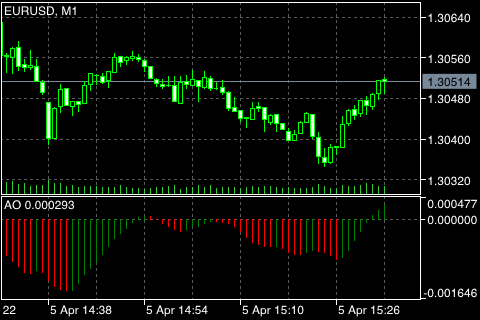