The Elliot Wave Theory represents a development of the well-known Dow theory. It applies to any freely traded assets, liabilities, or goods (shares, obligations, oil, gold, etc.). The Wave Theory was proposed by accountant and business expert Ralph Nelson Elliott in his study titled "The Wave Principle" published in 1938.

After he had retired and a serious illness had been discovered in his organism, Elliott started to observe stock markets and their charts in the hope of understanding the market behavior. After he had performed a large work, he concluded that the market, being a product of predominant psychology of the masses, followed some laws.

Elliott proposes, as well, that all price moves on the market are divided into:

The waves are divided into: 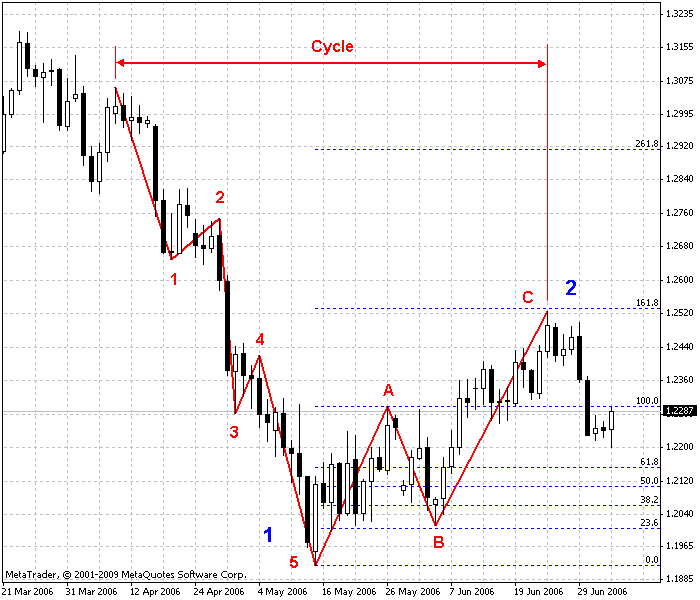 The longest cycle, according to Elliott, is called Grand Supercycle that is compose of 8 Supercycle waves. The latter ones are each composed of 8 Cycles, etc. For example, Fig. 2 shows 3 basic cycles. It can easily be seen that impulse waves and the subsequent corrective waves are proportional. The stronger impulse is, the stronger correction is, and vice versa.

The Elliott Wave Theory is criticized for there is not always a clear definition of when a wave starts or ends. Corrections are especially difficult in this regard.

Fibonacci Numbers provide the mathematical foundation for the Elliott Wave Theory. Fibonacci numbers play an important role in the construction of the complete market cycle described with the Elliott's waves. Each of the cycles Elliott defined are comprised of a total wave count that falls within the Fibonacci number sequence.

Under closer examination of Fig. 2, one can notice that the complete market cycle is composed of two large waves, eight middle waves, and 34 small waves. Similarly, at a bear market, we can see that a bear Grand Supercycle is composed of one large wave, five middle waves, and 21 small waves. If we continue this subdivision, we will be able to observe the consequent 89 even smaller waves, etc.

Respectively, a bull Grand Supercycle is composed of one large wave, three middle waves, and 13 small waves. At the next sublevel, there are 55 very small waves, etc. 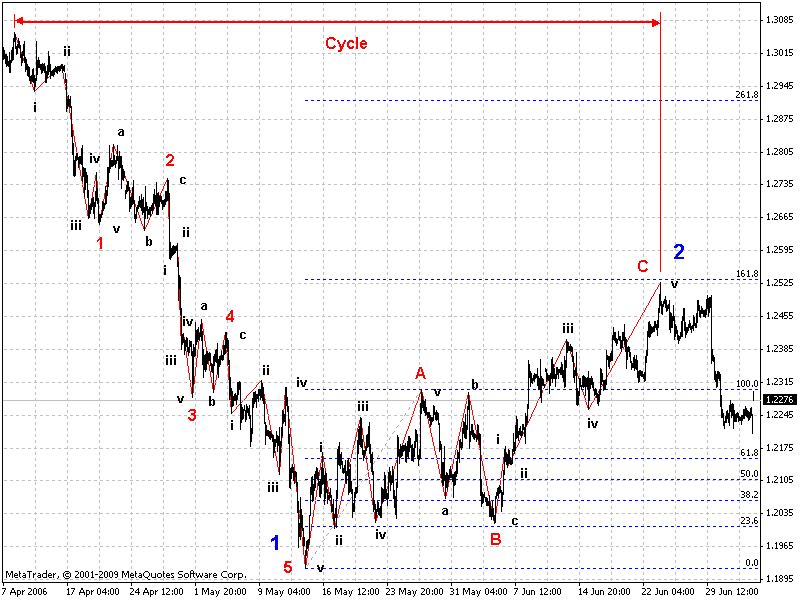 This principle is normally used in the Elliott Wave Theory as follows: movement in a certain direction should continue until it reaches some point in concordance with the summational Fibonacci number sequence.

For example, if the time, during which the trend does not change, exceeds 3 days, this direction should not reverse until the 5th day begins. Similarly, the trend should continue up to 8 days if it has not changed the direction within 5 days. 9-day trend should not be completed until the 13th day begins, etc. This basic pattern of how the trend movements can be calculated equally applies for both hourly, daily, weekly, or monthly data. However, this is just an "ideal model", and nobody can expect that prices' behavior will be so definite and predictable. Elliott noted that deviations could happen both in time and in amplitude and individual waves would hardly develop exactly in these regular forms.

Calculations within the Elliott Wave Theory resemble a road-map. Every wave has a set of characteristics. These characteristics are based on market behaviour arrays.

In the Elliott Wave Theory, a special attention is paid to individual description of each wave. Besides, there are certain laws used for proportional formations of Elliott waves (table below). These laws enable proper definition of where the wave starts and how long it is. The wave lengths are measured from high to low of the corresponding wave.

The above classical relations between waves are confirmed by actual ones with a 10%-error. Such error can be explained through short-term influences of some technical or fundamental factors. In whole, the data are rather relative. Important is that all relations between all waves can take values of 0.382, 0.50, 0.618, 1.618. Using this, we can calculate relations between both wave heights and wave lengths. Let us consider characteristics of each wave:

Unfortunately, Elliott's waves are well observed in the "old" market, but they are rather dimmed for the future. This is why practical use of the Elliott Wave Theory is often difficult and requires special knowledge.