This February, we have reported on an important milestone in the development of MQL5 Cloud Network - 500 million tasks were executed using the network capacities. Over the past six months, this figure has doubled and thousands of the network users from around the world have executed one billion tasks by September 2013! 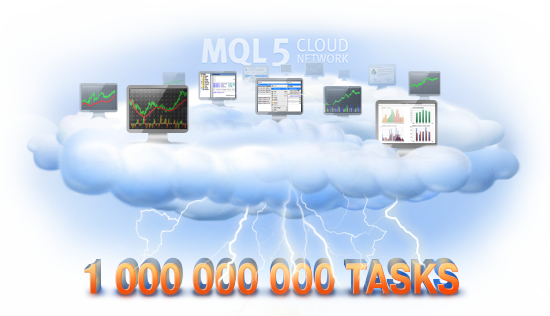 The network's computing power is used not only in the development of trading robots, but also in scientific studies involving complex calculations. MQL5 Cloud Network joins computers for solving the tasks swiftly and distributes computing resources among them. Those, who need additional computing power, receive access to the capacities of the network users. Users receive payment for providing their computing power.

You can view the detailed network statistics including involved countries, amount of produced work per day and distribution by CPU in Statistics section of the official MQL5 Cloud Network website.

If you have excessive computing capacity and you want to make some profit, install MetaTrader 5 Strategy Tester Agent right now and join MQL5 Cloud Network!